According to Beatles podcast host Jason Carty, there were only six photographs taken on the day.

There were “no managers, no stylists,” and the band were finished so quickly that “they had 2-3 hours to kill before their recording session started.”

Today (August 8) marks 50 years since the Fab Four took to the now iconic ‘Abbey Road’ zebra crossing to shoot the cover for what would become one of the most famous albums of all-time.

There were only six photographs taken. No managers, no stylists.
They were finished so quickly they had 2-3 hours to kill before their recording session started.
John & Paul went around the corner to Paul’s house.
Ringo went shopping.
George went to the zoo.

“50 years ago today, @TheBeatles gathered at EMI Studios for one of the most prolific photoshoots of their career,” Abbey Road Studios tweeted earlier today. “A policeman held up the traffic as photographer Iain Macmillan took six shots of the group walking across the zebra crossing just outside the studio.” 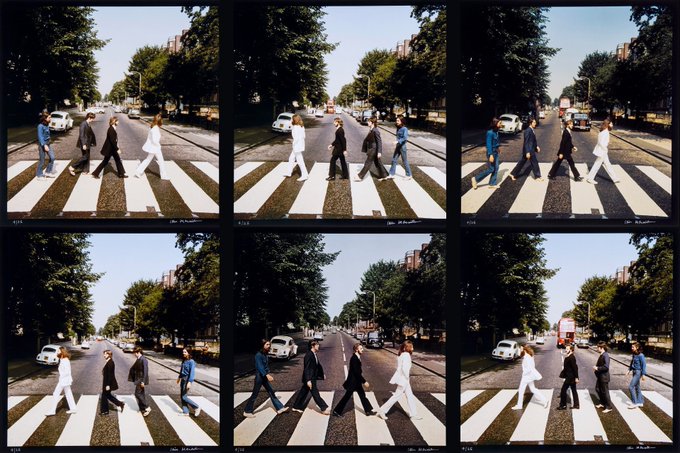 Carty also revealed that after the shoot, “John & Paul went around the corner to Paul’s house. Ringo went shopping. George went to the zoo.” He shared a diary entry from the band’s “roadie/fixer/pal” Mal Evans, that corroborated this information.

With photographer Iain Macmillan balanced on a stepladder and one policeman stopping the street’s light traffic, The Beatles crossed back and forth three times, led by John Lennon, followed by Ringo Starr, Paul McCartney, and George Harrison. Just six photos were taken, with the fifth selected as the

cover shot for The Beatles’ penultimate studio album, Abbey Road, named after the tree-lined street in which the studios are located. Released September 26, 1969, Abbey Road was not The Beatles’ final album, as Let It Be followed in 1970, but it was the last one John, Paul, George, and Ringo recorded together as a band.abbey

The Beatles will celebrate Abbey Road’s anniversary with a suite of beautifully presented packages to be released worldwide on September 27 by Apple Corps Ltd./Capitol/UMe. Now available for preorder, the album’s 17 tracks are newly mixed by producer Giles Martin and mix engineer Sam Okell in stereo, high res stereo, 5.1 surround, and Dolby Atmos, accompanied by 23 session recordings and demos, most of which are previously unreleased.