For some reason, the new Pretenders single, called Didn’t Want to Be This Lonely, was sort of stealth released recently. It’s the third or fourth single from an album coming out in July that has no marketing plan.

They’ve all been very good but this one is my favorite. It’s got a little “Not Fade Away,” a little Bo Diddley, a pinch of “Don’t Get Me Wrong.”

I love the video, too. “Hate for Sale” comes July 17th, it will sell 10,000 copies, no one will know what the hell is going on, and of course, there’s no tour because of the pandemic. It’s a shit show. Who’s in charge? I dunno. I think 2020 is the Pretenders’ 40th anniversary. Am I right? There’s a marketing hook. Someone use it!

The Pretenders  announce their brand-new album Hate For Sale, set for release on July via BMG. The album is the first to be recorded with the now long-standing touring line-up of the group. The band have also shared the first new music from the album The Buzz. 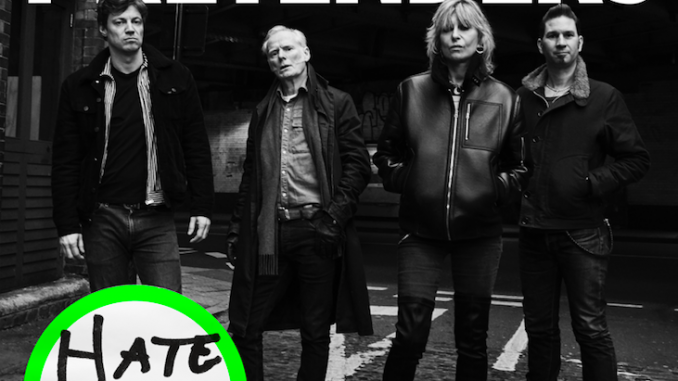 Produced by the revered Stephen Street (The Smiths, Blur) Hate For Sale is The Pretenders’ eleventh studio album and the first to be written collaboratively by Chrissie Hynde and electrifyingly dynamic guitarist James Walbourne. Speaking about writing with James for the first time, Chrissie added:

We always planned on writing while on the road, but as anyone in a band will tell you, being on tour is a procrastinator’s dream come true.”

To mark the album news, Pretenders have released the new single The Buzz.