A rare slice of David Bowie memorabilia will go under the hammer later this week in the shape of a 7-inch vinyl demo of the previously unreleased track Run Piper Run. (loudersound)

The song was recorded in 1967 and is backed by Lay Your Head Upon My Shoulder by The Move co-founder Ace Kefford – a track that would resurface on the 2003 album Ace (The Lost 1968 Tapes). 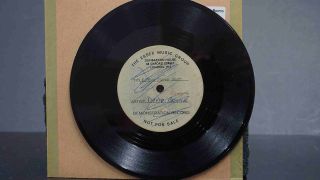 The disc will head to auction on Friday (January 15) at the Wessex Auction Rooms in Chippenham, England, with the online bidding set to get under way at 10.30am BST.

David Bowie and Morrissey‘s live cover of T-Rex classic ‘Cosmic Dancer’ is set to be officially released this month. A digital download of the single is available, with the song also arriving on streaming services. (VMZ)

The pair linked up for the cover version during a show at The Forum in Los Angeles in 1991, and it has been widely circulated online in the two decades since. eleased on February 19, 2021. On the other side of the single will be a cover of The Jam‘s ‘That’s Entertainment’, though as Morrissey’s official website points out, it is not the same version of the track as the 1993 version available on the internet.

Back in 2016, Morrissey notably omitted David Bowie from a list of this year’s celebrity deaths when speaking to the crowd at a Manchester hometown gig.