Trending
You are at:Home»News»Halsey to release first book of poetry

The Without Me hitmaker, also known as Ashley Nicolette Frangipane, announced the news to her social media on Thursday.

“I wrote a few thousand sentences but am somehow struggling to string together a single one to summarize how excited I am about this,” the singer wrote on her Instagram account, revealing: “I Would Leave Me If I Could, my first collection of poetry, is available for pre-order now.”

A summary of the book on publisher Simon & Schuster’s website describes it as a debut collection in which Halsey bares her soul.

Telling readers the work will contain: “the same artistry found in her lyrics,” the write-up decrees that Halsey’s poems “delve into the highs and lows of doomed relationships, family ties, sexuality, and mental illness”.

The blurb added that Halsey’s autobiographical poems are “more hand grenades than confessions,” and the book will “explore and dismantle conventional notions of what it means to be a feminist in search of power.”

Weird Times at Quarry Banks University, co-written by Ryan Sullivan, will be the second in a series of books by Yungblud, which launched last year with The Twisted Tales of the Ritalin Club.

“I wanted to amplify the idea that if you feel like you’re in a place where you don’t feel accepted, then come inside this world because here we love you for exactly who you are and we always will,” Yungblud said of his new project.

Recently Halsey has made a series of posts detailing her experience with police at the Los Angeles George Floyd protest, including an injury she received from being hit with a rubber bullet.

“[The police] fired rubber bullets at us. We did not breach the line. Hands were up. Unmoving. And they gassed and fired,” Halsey posted with photos of the altercation.

In a since-deleted post on her Instagram (via Stereogum), Halsey uploaded a photo of her bruised leg. “This hit me through layers of fabric and for that, I am extremely privileged. At close range it would have caused serious injury. They were fired at peoples’ faces during peaceful moments of the demonstration.” 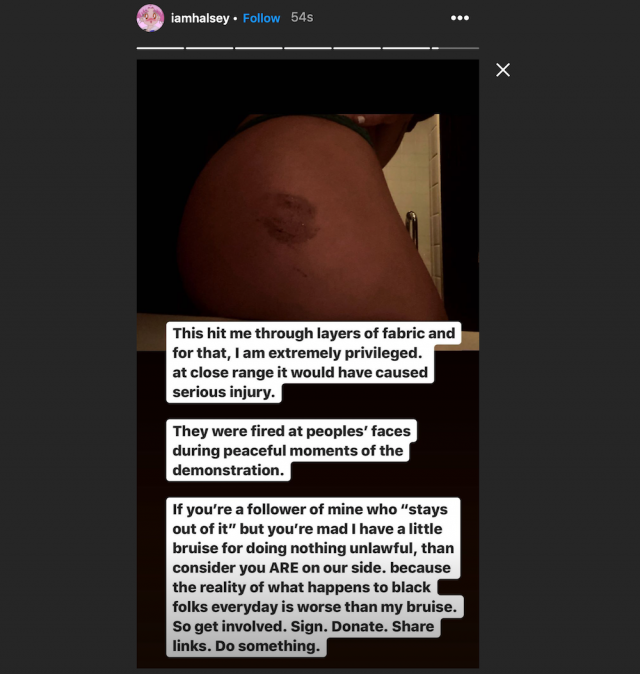 fired rubber bullets at us. we did not breach the line. hands were up. unmoving. and they gassed and fired. pic.twitter.com/K8YauF0APn

“This hit me through layers of fabric and for that, I am extremely privileged. At close range it would have caused serious injury,”

Every single day I am in awe of the medical workers on the frontlines. Their determination, selflessness and empathy is the single greatest example of our capacity to love and survive as humans. I am beyond privileged to be self isolating in my home, without the fear and obligation of essential work employment. Without a sick family member to care for. A child to feed. A financial crisis to navigate. So I tried to find a real way to make a difference. I have acquired and purchased 100,000 FDA certified 3 ply masks (with the help of Orange International Inc who sourced the masks for me from a factory in Guangzhou, China) These masks will be distributed to Cedars-Sinai Medical Center, Providence Saint Joseph, LAC+USC Medical Center, and Martin Luther King Jr. Community Hospital; for the medical professionals and non medical hospital staff who are working to put a stop to this pandemic and help millions of strangers they will never meet. Please continue to stay home, if you can. If you are on the frontlines, my heart is with you. And I will be continuing the fight to help you get the support and resources you need. 🤍🤍🤍 I am eager to redirect you to @givedirectly – A non-profit that allows you a way to give direct cash payments to vulnerable households in at risk communities, most of whom are single mothers. I will be making a sizeable donation, and encourage you to help in any way that you can. Special thanks to @anthonytomasli and the Li family, @jasonaron, PS Business Management, @fedex, and all the contacts at the hospitals who made this possible.

The New Jersey native scored reached Number Two in the US with her debut album ‘Badlands’, released in August 2015, Marshmello and Halsey have teamed up for the reassuring new song “Be Kind,” which explores trust issues and reinforces that it’s OK to be vulnerable with someone you love. The pair unveiled the song’s lyric video, which features bright animation to go along with the uplifting sentiments.
The singer released her third album Manic in January. The LP features guest spots from Alanis Morissette, BTS’ Suga and Dominic Fike, each of whom provided special interludes. She recently appeared on country singer Kelsea Ballerini’s single “The Other Girl,” off Ballerini’s self-titled third album.

Halsey was born in New Jersey. His family consists of African-American father, an Italian-American mother and two younger brothers. Growing up, she learned to play violin, viola and cello; at age 14 she began to play the acoustic guitar. Around the age of 16 she was diagnosed with bipolar disorder. Halsey finally chose as the name of art because it is an anagram of his real name. as well as that of a street in Brooklyn where he lived. the beautiful singer Badlands has shared some details about his personal life and his past, including the difficulties he faced when she was younger. Specifically, the pop star (known for his complicated adolescence) spoke about the depression he faced when he was 17 and that she in love with an older boy, who led a disreputable life.