But as interesting to petrol heads as the 1964 Ford Galaxie might have been, it was one of the car’s previous owner which was of real significance. He found out that the car was owned by mick Jagger..

Don was handed all the usual paperwork including the registration document which confirmed that a previous owner had been one Michael Philip Jagger from London – as an added bonus the document also bore the rock star’s signature.

Mick Jagger has always been a car lover having owned a variety of exotic and expensive models including Aston Martins, Ferraris and even a Morgan.

The Ford Galaxie, complete with a V8 engine, was a rare right hand drive model built in Canada.he car for a while but eventually it was sold and went on display at the Yorkshire Car Collection. In 2007,for 19,975 euros to a private collector. Recently Jagger  wanted  to buy an ice cream van but the 100,000 £ offer was turned down by its owner – who’s promised his daughter he will drive her to her wedding in it.

And that could be a way off – little Alessia is just 12 years old. Dailymail

Devoted dad Guiseppe Della Camera, 34, spent ten years restoring the rusting van to perfection after he spotted it on a farm – being used as a chicken shed. 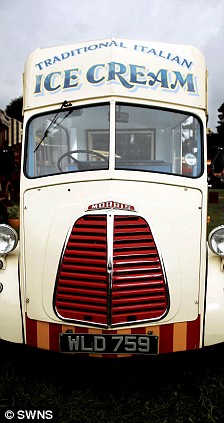 The restoration was such a success that Rolling Stone Sir Mick Jagger  recently offered to buy the vehicle for £100,000 when he clapped eyes on it at a show.

The owner said: ‘I was working with Carter’s Steam Fair on Wandsworth Common when Sir Mick came up with his son and bought a couple of ice creams.

‘He told me he’d really fallen in love with my van and asked me if I would consider selling it. I was stunned when he offered me £100,000.

‘Sir Mick has got seven children and I think he probably wanted my van to entertain his grandchildren.’

But I told him I couldn’t possibly sell it, because it’s always been my dream to drive my 12-year-old daughter Alessia to her wedding one day in my little ice cream van.”

English-born Giuseppe first got into the ice cream trade when his father Vic, from Naples, and Sicilian mother Grace won the catering concession for Battersea Park in London. to read the full article click here