Trending
You are at:Home»News»Ronnie Wood’s beagle Dolly dog rescued by a fan

Daniel Cato rescued dog in village of Little Gaddesden, Hertforshire He called the number on its collar and Ronnie’s wife Sally Wood answered She and Ronnie, 73, arrived ten minutes later in a Citroen Picasso to pick up dog.

A Rolling Stones fan met his idol Ronnie Wood after he stopped the rock star’s beloved dog from darting across a road when it escaped from his mansion.

Daniel Cato, 27, stopped the dog, a beagle named Dolly, from running into the busy road in Little Gaddesden, Hertfordshire, before calling the number on its collar. 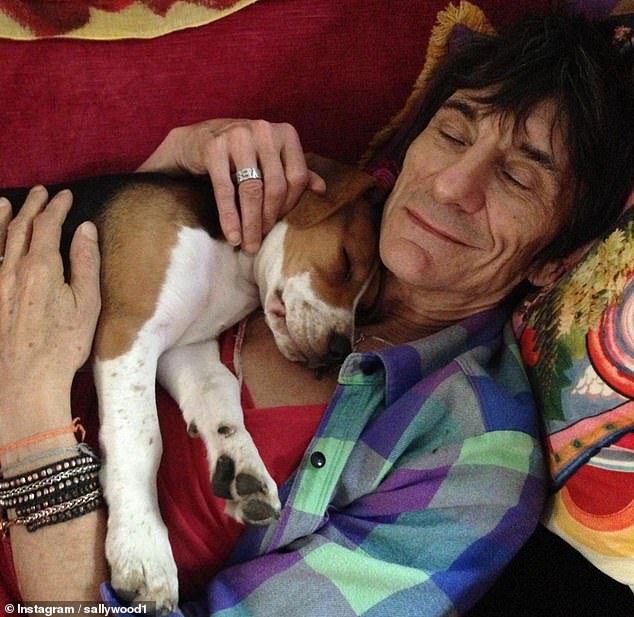 Ronnie’s wife Sally Wood, 42, answered the phone before she and her husband arrived ten minutes later in their Citroen Picasso to collect Dolly,

Mr Cato, a healthcare assistant, told the newspaper: ‘I didn’t realise it was Sally Wood who answered until she showed up with Ronnie.

‘He was dressed very cool with his sunglasses on — ever the rock star.’The dog escaped from the couple’s mansion while builders were working at their home.

Recently Ronnie Wood was seen enjoying an outing with wife Sally Humphreys as they went on a shopping spree around Carnaby Street, London, including a visit to the Rolling Stone No.9 store.

Ronnie and Sally made sure to keep themselves safe amid the coronavirus crisis as they both wore face masks while walking through London.The Rolling Stones rocker, 73, and his theatre producer wife, 42, looked smitten as they walked with their arms linked together. 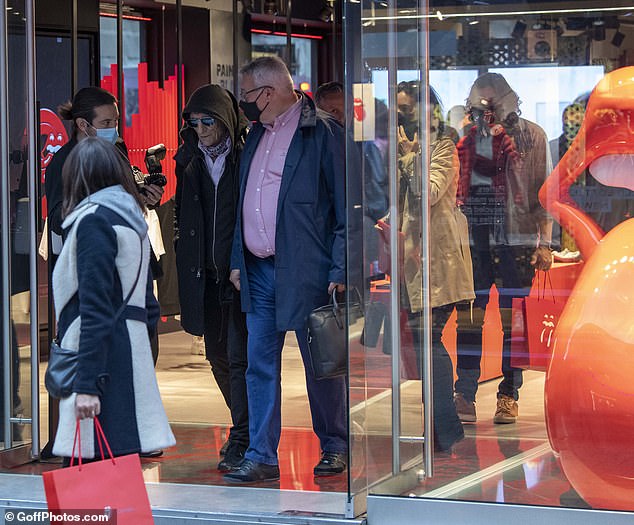 The rocker kept things casual as he a black duffle coat over a grey hooded jumper that he used to cover his head for a low-key look. 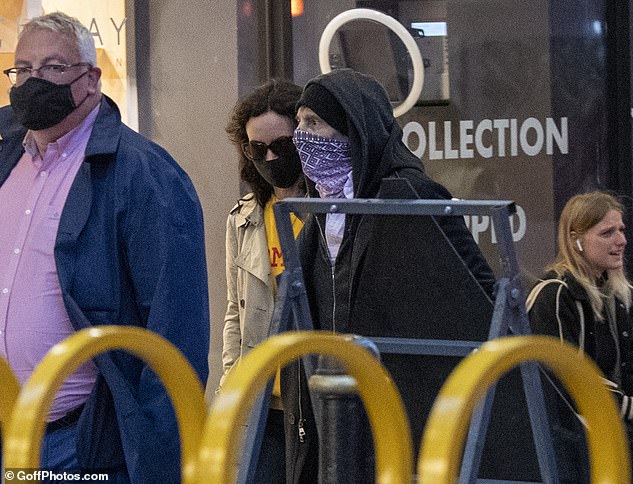 The 73-year-old confessed that he now spends his evenings knitting ‘endless scarves’ instead. Speaking on the Tea With Twiggy podcast he said: “I do knit.

“I used to hold the spool of wool for my mum. “She taught me the plain stitch and I still do it today and I knit endless scarves now.”

“I am an espresso man but that is an old leftover habit from rehab.I couldn’t do anything else so coffee was the thing.” He said he hoped he was a “living walking example of coffee” being good for you.

“Because I drink enough of the stuff,” he added.

“Luckily I had a valve that cut off, if it was going to be too much in my body, that said, ‘No don’t go over, don’t cross this line otherwise you will not make it’.”

‘If I do not control this then I would shoot off the edge of the precipice.’

The legendary musician, who has beaten lung cancer, previously boasted about his out-of-control binges on alcohol, cocaine and heroin. 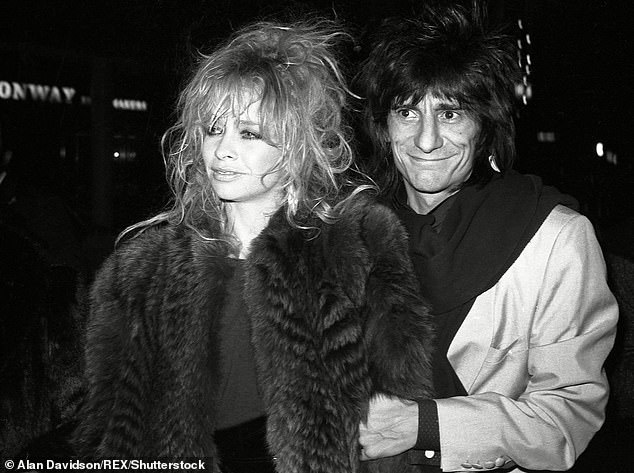 His oldest daughter Jesse is almost the same exact age as his current wife and is the daughter of former model and actress Jo Wood.

Jo and Ronnie were married for 26-years before their separation and subsequent divorce in 2011, however the pair still maintain a strong friendship.

Excerpt from Ronnie’s  late interview to The Telegraph,  By James Brown

In Hollywood he freebased cocaine; he was rescued off the coast of Rio de Janeiro from a burning boat ahead of a Stones concert on Copacabana beach; in the Caribbean he was almost implicated in a serious cocaine bust, and on more than one occasion he’s had to jump out of the way of Keith Richards firing his handgun.

Many of his friends, including Jimi Hendrix, Keith Moon, Alex ‘Hurricane’ Higgins and Amy Winehouse, were killed by drugs and drink, his good mate John Lennon was murdered, and longtime pals David Bowie and George Harrison died from cancer. And yet, despite a life of extreme rock’n’roll excess, Wood has just turned 73 years old, is still going strong,

The first question that has to be asked, and it’s a question he must have asked himself: Ronnie, how are you still alive? ‘Ha ha ha, well, I got clean! My life’s better now.’ Were you ready to clean up? ‘Yes I was. I don’t have any bitterness or anger. I’m wiser now; I had a great time and I still do, but in a different way.’

‘This is my morning face, my morning energy.’ Only a man who has spent a lifetime of nights playing live music to millions would think that 3pm is morning. Life flashes past you when you’re having a good time, and… ‘I’ve had a very, very good time,’ he finishes in laughter.

He’s not the only one in his family noticing the passage of time, though. ‘When I told the girls they wouldn’t be three ever again they just…’ and he tightens his fists into his eyes and pretends to bawl.

‘The studio is a mile from my house, so I get exercise walking here and back,’ he says. ‘Sometimes Sally can tell I’m itching to paint and just tells me to get down here. I’ve got two workers’ cottages and I’ve built this extension on the back of one for painting. I also paint in Barcelona and Ireland [where he owns second homes].’

He has nine grandchildren and six children of his own from three marriages, his eldest Jesse, 43, with model Krissy Findlay, was named after the outlaw Jesse James. He had adopted Jamie, the son of second wife Jo Karslake, before the couple had Leah, now 41, and Tyrone, 36, and now he has Gracie and Alice. Does he see anything of himself in the twins? ronnie with the current wife with ex-wives

‘There’s a bit of the wildness and the chaos with the girls. They both like to paint. When I decided to do these set lists before we go on stage, I didn’t want to bring oil paint or pastels because it would be too much messing about. So I have felt-tip pens and the girls love to pick them up and draw. Gracie in particular really likes to create. She’s got a very musical ear, too. She’s got a lot of my genes. Like her dad, she’s drawn to and tempted by the things you shouldn’t do.’

Do the older kids see the twins?

‘Well, with the lockdown they can’t, but when they do see each other they all love it and get on.’ Given his status, in a world where drugs and drink were often seen as being as creative as they were destructive, and his overt using in and around his home, how did he set boundaries as a father for the older children? Was he ever concerned it might encourage them to dabble?
‘Well, yes, but I had to talk with my boy Ty and admit that I had lied a lot about my using and behaviour, and he said, “Dad, I don’t want to hear this.” I’d rather just be honest and if they do go and experiment I hope they’d get to a point where they said, “OK, that’s that, I don’t want to do that any more.’’’
Is there anything, looking back, that you regret doing?

‘I know there were times when I could have been a bit more careful. There were close calls and I suppose if I’d been using my brain properly they wouldn’t have been so close. There were times over the years when Jimmy White [the snooker player]and I were up all night partying in London when I had to go straight into being Dad at breakfast.’

Despite loving music, his own father only saw Wood play a handful of times. Once in 1982 from the side of the stage at Wembley Stadium in his mid-70s. ‘He was dancing in his wheelchair, singing along, partying with Michael Caine. He was having the time of his life.’ What did he say to you afterwards? ‘I love you, Kid. He used to call me Kid a lot. That was a big thing for him to say because although we were a physically close family we weren’t really open like that… He was proud of me, he’d call me “Ronnie Wood of The Rolling Stones”.’

Has Ronnie ever asked the other Stones for parenting advice?

‘If I asked Mick, his answers might be of another world. Say we were discussing allowances for my kids. It wouldn’t be like asking Joe Blow down the road who might say: “Oh yeah, give ’em a fiver.” The answer might be, “I’m not the person to answer this.” It’s a bit like pulling teeth with us giving each other advice.’

Is there anyone he missed? ‘Elvis, one time he was ill in hospital, in Memphis I think, and they wouldn’t let me in to see him. Turns out Robert Plant and Jimmy Page were in there with him. If I’d known that I’d have gone, “I’m Ronnie Wood from The Rolling Stones.”’

You can sense the fondness the remaining Stones founders, Jagger, Richards and Charlie Watts, have for ‘the new guy’. Did they give you an ultimatum that helped you finally clean up? ‘Mick asked me if I wanted to help myself, and was there anything he could do to help. I appreciated that, they’ve been very caring around me.  To read the full article click here