The draft of a letter John Lennon sent to Queen Elizabeth to return the award he received as a member of the Beatles was unearthed Wednesday at a Fab Four exhibition in Liverpool, CNN reports.

In the letter, Lennon seriously and playfully mapped out why he was sending back his MBE (Member of the British Empire) medal. “I am returning this MBE in protest against Britain’s involvement in the Nigeria-Biafra thing, against our support of America in Vietnam and against Cold Turkey slipping down the charts,” referring to the singer’s 1969 single.

Lennon added his signature and credited the letter to “John Lennon of Bag,” referring to his and wife Yoko Ono’s “bagism” campaign. The anonymous owner of the letter discovered it within the sleeve of a used record they bought for £10. At the Beatles Story exhibition Wednesday, a memorabilia expert put the value of the letter at roughly $72,000.

The letter is believed to be the first draft of the note Lennon ultimately sent to Queen Elizabeth; it’s speculated that because the handwriting on the letter became smudged, Lennon instead sent a more pristine copy. 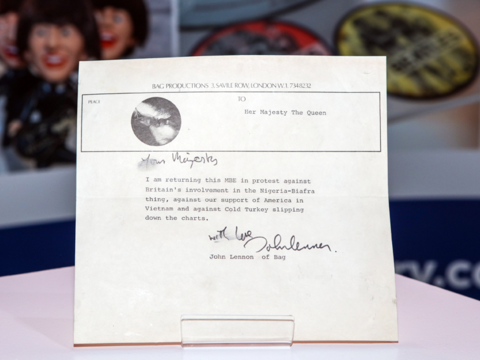 “You can quite clearly see that the signature in this letter has been smudged. My theory is that John Lennon never sent this draft because of the smeared ink,” music memorabilia expert Darren Julien told CNN. “If you’re writing to The Queen, you want the letter to look pretty perfect, you don’t want the ink to be smudged. This suggests that he wrote a second version of the letter, which was the one that was actually sent to The Queen.”