Trending
You are at:Home»Fashion»Stella McCartney unveil new collection“All Together Now”

The “All Together Now” range features clothing for women, men and children, all of which feature playful graphics, motifs and slogans inspired by classic Beatles songs.

“It affected me in a way I just wasn’t expecting,” McCartney tells Vogue. She found herself removed from her familial ties and inspired as a creative to channel the trippy colours, comedy, lyrics and spirit of togetherness into a capsule collection, aptly entitled “All Together Now”. “It’s shockingly modern to me that these four young guys from Liverpool were championing themes of unity and solidarity,” she continues. “This idea of connecting people has never been more relevant.”

Introducing ?… ‘All Together Now’! Bringing the fun, fantasy and psychedelia of The Beatles’ iconic film ‘Yellow Submarine’ back to life and sharing its message of peace, love and togetherness with a new generation. #StellaMcCartneyxTheBeatles⁣ ⁣ Watch the full campaign film, starring musical talents @KeyahBlu, @OscJerome, @JoyCrookes and @femiondrums, on #StellasWorld now.⁣ ⁣ #StellaMcCartney #TheBeatles #YellowSubmarine

“I’ve grown up in a family that doesn’t chuck stuff away,” McCartney (the daughter of Beatles legend Paul McCartney and famed photographer Linda McCartney) told PorterEdit. “And it sounds silly, but I didn’t have a huge amount of money as a kid (this article appeared on New York Post Page Six) 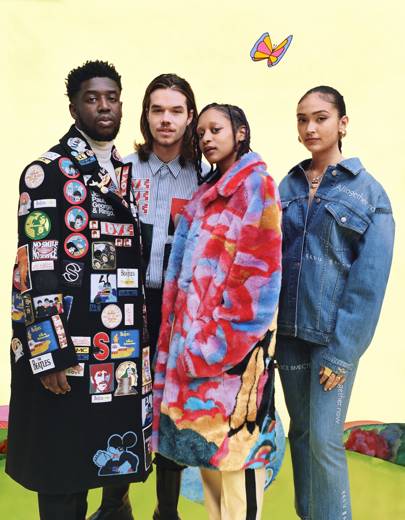 Stella ’s personal childhood, her family prints and most importantly his father’s iconic band The Beatles heavily influenced this collection and it shows, beautifully. (source Daman.co.id) This collection has a lot of Beatle references, starting from the cinematic theme titled ‘All Together Now’; portraits of her father’s buddies John Lennon, Ringo Starr, and George Harrison are all posterized and seen on the pieces, along with ‘All You Need is Love’ patches on shirting. The song “When I’m Sixty Four” made an appearance by number graphics on the classic grey overcoat, and not to mention a landscape from the iconic “Pepperland” scene from Yellow Submarine is also digitally-printed on organic cotton poplin shirt.

As a proud vegetarian brand, their vegetarian graphics return with additional “Powered By Plants” graphic. They also commit in their sustainability with their organic cotton jersey, organic cotton denim, and regenerated cashmere, along with an introduction to the new recycled cotton.

All in all, the Stella Menswear Autumn Winter 2019 collection is definitely a sweet, sweet ode to The Beatles’ legacy, with a touch of modern nautical utility.