Trending
You are at:Home»News»The Who have released an official lyric video for “Baba O’Riley

The Who – featuring vocalist Roger Daltrey and guitarist Pete Townshend – have released an official lyric video for their iconic 1971 hit, “Baba O’Riley”. The video was uploaded to YouTube on September 18, 2020.

“Baba O’Riley” is taken from The Who’s 1971 album, Who’s Next. Townshend originally wrote the song for his Lifehouse project, a rock opera intended as the follow-up to the Who’s 1969 opera, Tommy. “Baba O’Riley” was initially 30 minutes in length, but was edited down to the “high points” of the track for Who’s Next. The other parts of the song appeared on the third disc of Townshend’s Lifehouse Chronicles as “Baba M1 (O’Riley 1st Movement 1971)” and “Baba M2 (2nd Movement Part 1 1971)”.

The Who are gradually restoring these sound interviews and posting them on the Fan Club pages. Last month we posted an interview with Roger Daltrey from January 2008 and we have an interview which Rob did with manager Bill Curbishley coming up shortly. 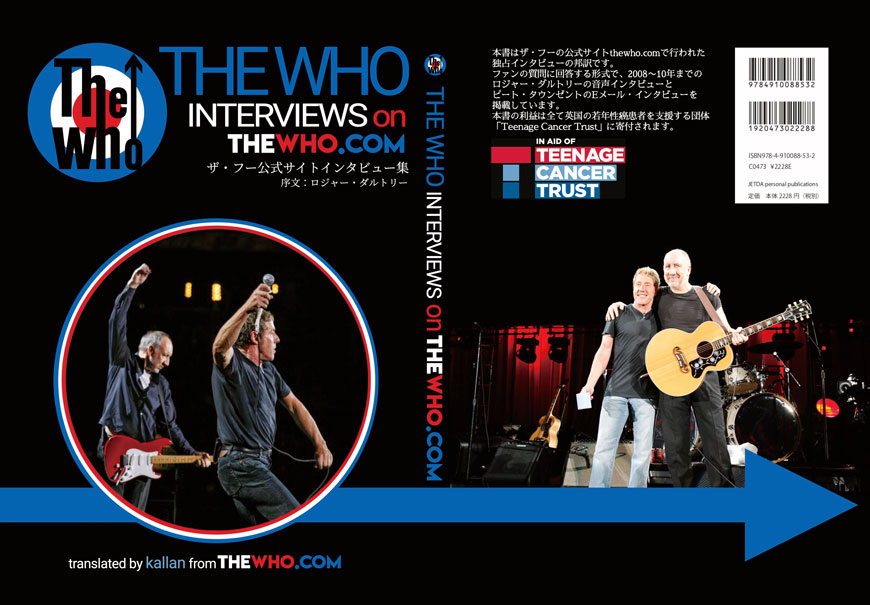 In the meantime, Japanese fans will be delighted to hear that some of Rob Lee’s interviews have been painstakingly translated into Japanese by Who fan Kallan and published in a 132-page book and is available to purchase online. All profits from the sale of this book will go to the Teenage Cancer Trust. Here are the full details in both English and Japanese.

THE WHO INTERVIEWS ON THEWHO.COM

Translated by Kallan from thewho.com

A Japanese translation book that features the interviews (2008-2010)
with Roger Daltrey and Pete Townshend on thewho.com.
All profits from selling the book will go to the Teenage Cancer Trust.

“Pete [Townshend]’s music is particularly suited to being embellished by the sounds that an orchestra can add to the band,” Daltrey said in a statement. “Tommy can mean whatever you want it to mean; I use the characters in it as metaphors for parts of the human condition, so it’s a kind of a story of the human spirit. Even though it is 50 years on, I approach it as though I’m singing it for the first time.”