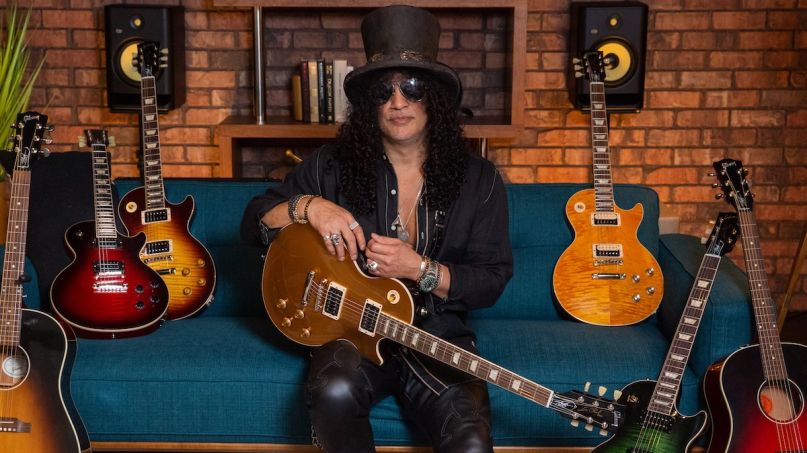 “Developing my new Collection with the new team at Gibson has been really exciting,” Slash said in a press release. “The quality and attention to detail is next level, and these guitars truly reflect what I play live and in the studio. I think guitarists will be inspired by what we’ve put together.”

“I think I was always aware of certain changes. Not so much in Gibson proper – it was just that there were all these new divisions being added; amendments to the company that were unnecessary, stuff that I didn’t really see the vision for. But I was, like, ‘Eh, whatever!’ because it wasn’t affecting what I do.

“But when I started to do more signature models with Gibson, I started to become more aware of the experimental stuff they were doing with the electronic stuff, which was becoming a big part of the fabric of the brand. And I was like, ‘I just don’t get it! I don’t need it, so I don’t know why anybody else is going to need it!’

“Then there was a lot of turnover happening in the last couple of years with some of the really key people who’d been at Gibson forever, and that’s when it started to get a little weird. And then the inevitable happened.”

“‘Whole Lotta Love‘ – to me that was the soundtrack for what the ’70s were gonna be. It was so driving and it was so sexy. I think that song is what initially turned me on to the Les Paul because of the sound of that guitar.

“I didn’t know a lot about which guitar sounded like what, but a lot of guitar players I liked at that point in time had Les Pauls and I just thought they looked cool.

“I did try a whole bunch of different guitars, from Strats to SGs, and then came full circle back to Les Paul, and that wasn’t until 1985 with Guns N’ Roses. I think I was using a Bicester Rich when Guns N’ Roses first started.”

“I think a lot of Zeppelin stuff – ‘Whole Lotta Love,’ ‘Black Dog,’ ‘The Ocean’ was a good one… If we just sat here I could go through all the records. ‘You Really Got Me’ from The Kinks was great… “There were a lot of The Who records. When I was a kid living in England my dad was a huge rock ‘n’ roll fan, a huge Who fan. So there was a on of really cool Who riffs. ‘Magic Bus’ was a great one.

“You’ll be messing around and a succession of notes will go by. It will catch your ear and you’ll go back and sort of suss out what it was. And they come from just jamming with the drums a lot of times. Riffs are a very much rhythmic thing, and if you’re just jamming with drums and things will pop out.”

“I use the metronome on my phone sometimes. I have a tendency to write in weird key signatures, not intentionally. So sometimes I’ll use a metronome just to check out what it is that I’m doing to see how that works. “I could be jamming something in my hotel room all night the night before soundcheck, then come into soundcheck and go ‘Check this out!’ And realize that as soon as the drums start to come into it it’s completely different than what I thought.

“It’s a discipline but it’s a good thing because it teaches you to play in time, obviously. But one of the great things is – as a soloist or somebody who just jams a lot – you can have a tendency to speed up and do all kinds of stuff at your whim. Which isn’t really conducive to playing in a band situation.