Trending
You are at:Home»News»Springsteen Surprise Fans With Two-Hour Set at Stone Pony (Watch)

The lucky 400 attendees for the invite-only event got a 22-song set that included hits from his albums “Born in the USA,” “Born to Run,” “Greetings from Asbury Park,” “The River,” a few covers and more, according to Stan Goldstein, co-author of the book, “Rock and Roll Tour of the Jersey Shore.”(Variety)

Springsteen — who was backed by New Jersey veteran Bobby Bandiera’s band — was joined by E Street Band drummer Max Weinberg mid-show as a surprise, and also by Kings of Suburbia vocalist Layonne Holmes for a cover of “The Boy From New York City.” Weinberg added extra muscle for E Street staples “Rosalita,” “Tenth Avenue Freeze Out” and “Born to Run.”

Bruce Springsteen returned to his hometown of Freehold, New Jersey to offer a surprise introduction to the first public multiplex viewing of his concert/documentary film, “Western Stars.”

“We knew we weren’t going to tour, so I tried to figure out a way to get the music to you,” he told the theater.Thanks for coming out,” he continued. “Thanks for supporting me all these years, and enjoy ‘Western Stars.’”

This was the second time in a month Springsteen returned to Freehold. In September, he came in for the opening of the exhibit “Springsteen: His Hometown,” performing one song with Joe Grushecky at the grand opening. The exhibit is currently on display at the Monmouth County Historical Association on Court Street in Freehold.

“I’m a man of many talents. You know I write books and Broadway plays and now l’m making movies. I’m going to try being an astronaut next: I’ll let you know how that goes.”

Speaking to host Edith Bowman about the process of adapting Western Stars to the screen, Springsteen said: “It was very enjoyable because I got to go inside the songs again…[to]try to [get]a deeper understanding of what they were actually about. What was I actually trying to write about?

“…I was working on a meditation about men and women and love and the difficulty of love and how do you move from being an individual actor into a life that’s filled with people and family and friends and some communal experience. Everybody has to walk that journey. And so the film was a study about what that trip is like, and the spoken pieces end up being just these meditations, you know these little tone poems that lead people into a deeper understanding of the music.”

Bruce Springsteen talked to Mark Radcliffe with some exclusive clips below. The full interview will broadcast on 6 Music’s Radcliffe and Maconie’s show this morning, Saturday 19th October at 9.15am.(music-news.com)

MARK: Do you eat well, do you work out, do you go running?
BRUCE: I don’t run. I can’t run anymore! I’ll walk very fast however and I just generally I take care of myself pretty well with the diet and exercise a little bit but that’s about it.

MARK: If you’re running out of the barn and you could only take one record – of yours – which one?
BRUCE: Oh man. If I could only take one. Well it’s tough, because it’s between two, but I might take Nebraska. It cost me $1000 to make with a recording deck about the size of that album cover, but it was really a special moment, you know. If I had to take a rock album, I’d probably grab Born to Run

The legendary New jersey rocker has also been out promoting his first feature-length documentary film, Western Stars, since it made its debut at The Toronto International Film festival in September.

And on Wednesday he was back at it again when he and some of his family attended a special screening in New York City, ahead of its October 25 release.

While on the red carpet, he got the support of wife Patti Scialfa, 66, and their daughter Jessica Springsteen, 27.

Their daughter showed off her toned curves in a black plunging mini-dress. 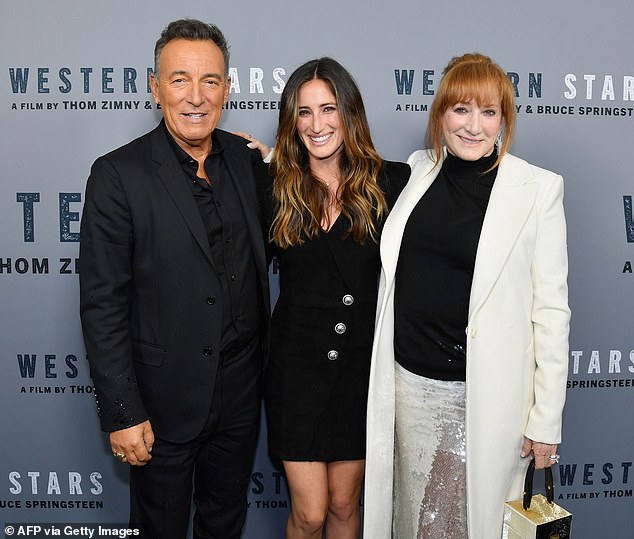 Recently, almost 20 years after he wrote the song for a “Harry Potter” movie, Bruce Springsteen has finally found a home for his unreleased ballad “I’ll Stand by You Always.” The song has been added to the end credits of “Blinded by the Light,” an upcoming, Springsteen-heavy New Line/Warner Bros. film from “Bend It Like Beckham” director Gurinder Chadha.

The song did not appear in “Blinded by the Light” when the film screened at Sundance in January, where its $15 million deal with New Line was the festival’s biggest. But it was added before this week’s screenings in Los Angeles and at CinemaCon in Las Vegas, and will now follow the song “Born to Run” during the end credits.

Bruce Springsteen has released a lyric video for “I’ll Stand By You,” a previously unreleased song that appears in the new movie Blinded By The Light. The visual features the lyrics from the song along with scenes from the movie, which is about a Pakistani teenager growing up in 1987 Britain who falls under the spell of Springsteen’s music.

Prior to the film’s release, Springsteen offered a musical contribution to its director, Chris Columbus. However, distributors Warner Bros. Pictures turned down Springsteen’s offer, leaving the song – entitled ‘I’ll Stand By You Always’ – unreleased in Springsteen’s vaults.

In further proof that Bruce Springsteen’s Hogwarts letter got permanently lost in the mail, his rejected Harry Potter song, “I’ll Stand by You Always,” has apparently been unleashed on the internet. Last year, Springsteen admitted that he wrote an “uncharacteristic” ballad for his eldest son, which he then submitted for the first Harry Potter movie in 2001.