Trending
You are at:Home»News»New Beatles ‘Get Back’ Documentary, Delayed for a Year

“The Beatles: Get Back” was supposed to be released by The Walt Disney Studios in the United States and Canada on Sept. 4. N has been delayed for an year.

Crushing news for Beatles fans: Peter Jackson’s documentary “The Beatles: Get Back,” which was initially set for Sept. 4 of this year will now go close to a year later on Aug. 27, 2021. The move was announced by Disney, the film’s distributor, on Friday (June 12).

Walt Disney Studios has acquired the worldwide distribution rights to filmmaker Peter Jackson’s previously announced Beatles documentary, “Get Back,” which creates a new film from the hundreds of hours of footage that spawned the group’s 1970 swan song “Let It Be.”

The top-secret trailer of “Get Back” screened by Variety earlier this year reveals practically a different world: It’s brighter both visually and spiritually, with many, many shots of the Beatles joking around, making fun of each other, singing in silly accents and generally indulging in vintage Moptop hijinks. It also includes additional footage from the group’s legendary 42-minute “rooftop performance” that caps the “Let It Be” film, which was their last live performance.

Watch 1969 full movie Let It Be here below

Jeff Jones of Apple Records said because of the perception that the 1970 movie was a depressing look at the Beatles coming apart, Jackson was brought in to digitally clean up old footage, removing what reporter Jem Aswad described as the “murky, shadowy atmosphere” of the original. It’s a process similar to what the director did when colorizing the World War I footage in They Shall Not Grow Old.

“We have created a brand new film that will attempt to bust the myth that the Let It Be sessions were the final nail in the Beatles’ coffin,” Jones said.

On Amazon in both the UK and USA, a book with the title The Beatles Get Back was announced for release in October 2020. John Bezzini noticed the listing on Amazon and contacted the publisher and received this info: “The Beatles Get Back” is the authorized story of the making of the “Let it Be” album and the Beatles’ break-up, told through exclusive photographs, transcripts of the recording sessions, and an essay by Hanif Kureishi. The book will be the companion to the film directed by Peter Jackson, both released next fall (exact date to be announced). 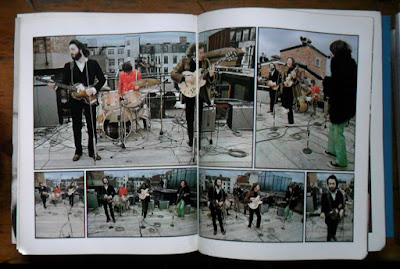 The new film will be based around 55 hours of never-released footage in the studio, shot between January 2nd and January 31st, 1969.

These studio sessions produced The Beatles’ Grammy Award winning album Let It Be, with its Academy Award winning title song. The album was eventually released 18 months later in May 1970, several months after the band had broken up.

Ant: The Beatles are the subject of today’s #MovieTalk! #BreakingNews on a just announced film!!! 🎞 🎥 🍿

This may be one of the reasons the documentary is only available on old formats and is now something of a collector’s item. That may all change soon according to Paul McCartney, who told a Canadian radio station the Beatles film may hit DVD and Blu-ray in 2020 in time for its 50th anniversary. But there’s a twist. It won’t be the original film. according with Den of Geek. “I think there may be a new version of it,” McCartney told Yannick Tremblay during an interview for Canada’s Radio X. “That is kind of the latest gossip.”

I tell you why I think it’s gonna happen. I think there may be a new version of it. Ok, that is kind of the latest gossip. Because there’s a lot of footage and the original movie came out and it was really… sort of… about the break-up of The Beatles.

And so for me, it was a little sad, the movie. But I know people are looking at the footage; there’s about 56 hours of footage.

And someone was talking the other day to me and said ‘the overall feeling is very joyous and very uplifting. It’s like a bunch of guys making music and enjoying it, you know. So I think there is some talk about making a new movie, re-editing it from the same period, from the same footage.

We can make a new film out of it. So who knows, that may be happening in a year or two.”

The Beatles film “Let It Be” had its premiere in New York 48 years ago. The lp release in UK was Today, 8th May 1970
Let it Be The film, which was shot in January 1969, was originally intended to be a TV special called Get Back featuring the group rehearsing for their first live show in over two years.

“We shot thousands and thousands of feet of 16mm footage. There was a discussion about where they would shoot the actual TV special. Each Beatle wanted a different place. A few days later they still couldn’t make up their minds and John said to me, ‘What’s all the shit you’ve been shooting?’ He liked the dailies and said, ‘We don’t have to do anything else; we’ll just use this and do a free concert on a roof somewhere. Let’s do it tomorrow night.’ And that became Let It Be. It’s as simple as that!

Michael Lindsay-Hogg’s 1970 documentary film was recorded in January 1969, while the band rehearsed songs for their twelfth and final studio album Let It Be. originally planned as a television documentary that would go along with a concert broadcast, the film was supposed to look in on the band like a fly on the wall. The movie ends with the group’s iconic, and much-copied, last live concert on the roof of Apple’s headquarters.