Trending
You are at:Home»News»Inside Bob Dylan’s Adventures in the 21st Century

To celebrate the release of Bob Dylan’s excellent new album, Rough and Rowdy Ways,  Rolling Stone‘s Dylan experts put together a definitive list of his greatest songs of the 21st century, from “Things Have Changed” to “It’s All Good.” In a new episode of our Rolling Stone Music Now podcast, Angie Martoccio, Jon Dolan, and Simon Vozick-Levinson join host Brian Hiatt to discuss Dylan’s creative renaissance over the last 20 years, and why the 2000s have been more fruitful decades for him than the Eighties and Nineties. The panel then goes through our list of Dylan’s best latter-day songs, including a lengthy defense of the just-released “Murder Most Foul,” a brilliant song that faced lazy knee-jerk dismissals upon its release.

Download and subscribe to our weekly podcast, Rolling Stone Music Now, hosted by Brian Hiatt, on iTunes or Spotify

The 79-year-old folk rock icon’s latest release, Rough and Rowdy Ways, has been met with huge critical acclaim since its release, and it tops Friday’s Official Charts Company rundown with 34,000 chart sales.

In addition to becoming the oldest ever act to top the chart with an LP of new tracks, he also becomes the oldest male solo artist to land a number one, surpassing Rod Stewart, who was nearly 75 when he reached the summit with an orchestral reworking of his old hits in December.

The Official Charts Company Midweek Sales Flash is in and Bob Dylan is leading the way in the albums chart, posting 23,680 sales for Rough And Rowdy Ways.

Bob’s fellow rock legend, Neil Young, is at two with his 11th Top 10 album, including two with the supergroup Crosby, Stills, Nash and Young – his highest charting collection since 1994’s Sleeps with Angels.

Lady Gaga’s Chromatica is at three, with Lewis Capaldi’s Divinely Uninspired to a Hellish Extent at four, and Harry Styles’ Fine Line completing the top five.

In the singles chart, Rockstar by DaBaby and Roddy Ricch makes it a sixth non-consecutive week at number one with former chart-topper Rain On Me by Lady Gaga and Ariana Grande staying at two. Dance hit Breaking Me by Topic and A7S climbs one place to three

According to the Official Charts Company, Dylan’s 39th studio album is outselling the rest of the top 5 combined by a margin of three-to-one, and is the best-seller across CDs and downloads.

False Prophet’ marks the third single Dylan has shared from ‘Rough and Rowdy Ways’. Back in March, the legendary songwriter released ‘Murder Most Foul’, his first original song in eight years. The 17-minute epic about the assassination of JFK and its repercussions earned Dylan his first-ever number one on a US Billboard chart.

Should Rough and Rowdy Ways hold its spot when the Official U.K. Albums Chart is published this Friday (June 26), it’ll give Dylan his ninth U.K. No. 1, and his first since 2015’s Shadows In The Night.

Also, Rough and Rowdy Ways will become his landmark 40th top 10 in a chart career spanning 56 years, the OCC reports.

The best-seller on vinyl belongs to another Hall of Famer, Neil Young, whose “holy grail” ’70s album Homegrown (Reprise) starts at No. 2 on the Official Chart Update. Homegrown, recorded in 1974 and early 1975 but unreleased until now, could give the Canadian rocker his highest charting album in the U.K. for more than a quarter century (his Sleeps With Angels set with Crazy Horse from 1994 also peaked at No. 2).

A NEW BOOK FROM DYLAN

Just when you think the place has been emptied out, something new — a bootleg tape, some video footage, a collection of sketches and doodles — pops to light.(The New York Times) Inspired by a series of photographs that Feinstein took in Hollywood during the 1950s and 60s, Bob Dylan wrote an extraordinary series of poems that have remained unpublished for decades.

They are thought-provoking, witty and erudite observations of the world; through the lens of Feinstein’s photographs, they speak volumes about the anonymous faces and places of Los Angeles, and offer wry commentary on images of stars and legends in the neighbourhood at the time.

Photos of Frank Sinatra, Marlene Dietrich, Judy Garland float through the book, as do poignant images of starlets, casting couches, employment agencies and palm tree’d boulevards. Feinstein was there with a camera to capture some world-famous events, such as Marilyn Monroe’s memorial service, and he photographed the forgettable moments, preserving them perfectly and timelessly. 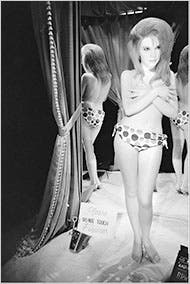 is a series of 23 poems he wrote in the early 1960s to accompany a collection of Hollywood photographs by Barry Feinstein. Either half of this collaboration would be worth having, but combined, under the quizzical title “Hollywood Foto-Rhetoric,” they add up to one of the oddest coffee-table books to come along in a while.

Occasionally a poem will explicitly comment on the accompanying photograph. The one next to a picture of a heartbroken Marlene Dietrich at Gary Cooper’s funeral, for example, reads:

it dare not ask your sculpturer’s name with glance back hooked, time’s hinges halt as curiosity’s doom inks beauty’s claim