“There was something very special about singing ‘Here Comes the Sun’ — a song that was so meaningful to me and millions of other people — on the album,” says Love, who plans to perform the track in tribute to Harrison with The Beach Boys in Saratoga on Sunday. “Doing it with the traditional harmonies that we’re known for was a beautiful and mystical experience.”

Love’s friendship with Harrison, dating back to the 1960s, was strengthened after The Beach Boys singer (and songwriter of classics “I Get Around,” “Help Me, Rhonda,” “Dance, Dance, Dance,” “California Girls” and “Wouldn’t It Be Nice”) traveled with The Beatles to Rishikesh, India in 1968 to study under Maharishi Mahesh Yogi, the guru known for developing Transcendental Meditation.

Over the two months they spent in India, the musicians attended lectures, played music and celebrated each other’s birthdays: Harrison’s on Feb. 25 and Love’s on March 15.

“He was such a cool person,” Love says. “People would say, ‘Sgt. Pepper’s Lonely Hearts Club Band’ was the best album,’ and George would say, ‘No, it’s just another album.’ He was so down to earth and yet so into spirituality.”

Along with sharing an astrological sign and an interest in metaphysical teachings, Love with The Beach Boys and Harrison with The Beatles remain part of a small, elite group of artists to have achieved 12 Top 10 hits within five years.

While some, including Paul McCartney, may have regarded the bands as rivals, Love saw them like a “mutual admiration society.” And Love was the one who convinced McCartney at the breakfast table in India to “talk about all the girls around Russia” in the song that eventually became “Back in the U.S.S.R.”

In a track called “Pisces Brothers” on his 2017 double album “Unleash the Love,” Love shared his feelings about that time and place and Harrison, in particular. He often pairs the tune with “Here Comes the Sun” on the current Beach Boys tour, as a reminder that there’s light and warmth even after the “long, cold, lonely winter” of Harrison’s loss.

“When he passed away, I felt very melancholy about that,” Love says. “But he was a great guy, a great soul, who left us some great music. He was always looking at things in the positive. It’s winter, it’s cold, there’s still ice and snow around, but here comes the sun. That’s the way I approach a negative and try to find a silver lining in the cumulonimbus cloud.”

RELATED : The documentary film, A Beatle (George Harrison) in Benton, Illinois, originally released in 2005. It will be available in an expanded two-disc special edition on September 13.

At the time of its original release, Harrison was treated with bemusement by the Illinois locals, who had never before seen a young man sporting the kind of hairstyle or clothing he preferred. He was introduced as the “Elvis Presley of England” and used the occasion of his visit to give the first on-air interview by a Beatle in America, having hitchhiked to radio station WFRX with Louise, a fresh copy of the group’s new single “She Loves You” in hand (a DJ at the station had played “From Me to You” that June, the first in America to spin a Beatles disc). George also went on a shopping spree, buying records and a Rickenbacker guitar, and even met with the guitarist of a popular local band to learn some new riffs. 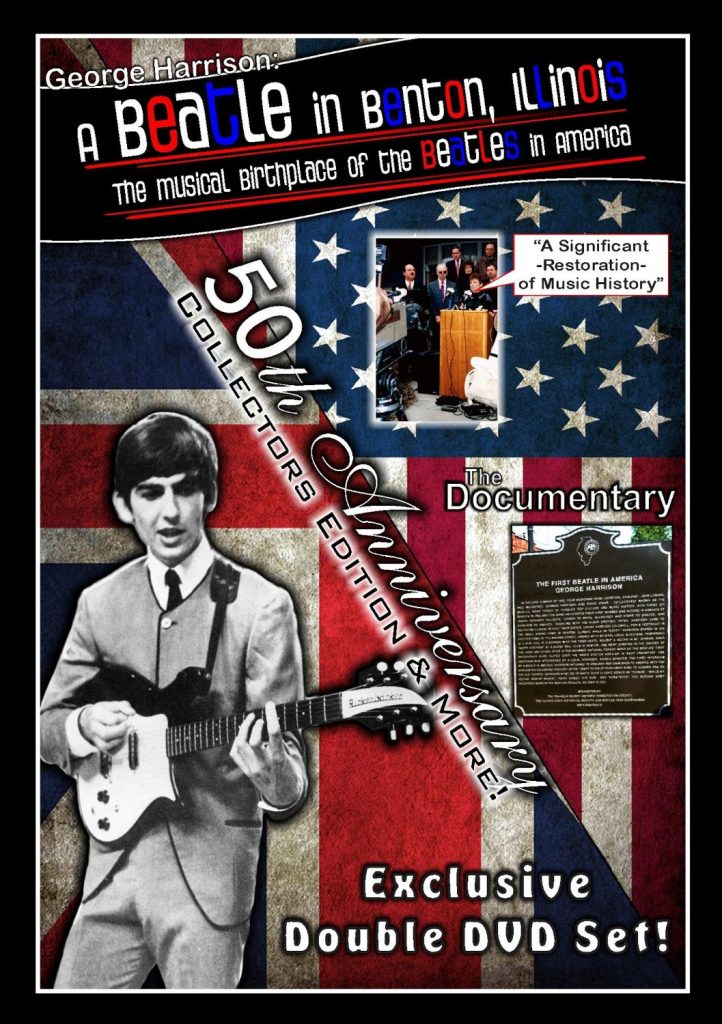 George Harrison, was living up to his reputation by visiting his sister, Louise Harrison Caldwell, in Benton, Ill. At that time the other three Beatles were vacationing in Europe, Paul and Ringo in Greece, and John and his wife, Cynthia, in France

Not surprisingly, Harrison’s southern Illinois connection is often overlooked by biographers and filmmakers, most recently by Martin Scorcese, whose three-hour tribute to Harrison, Living in the Material World (2011), fails to link Harrison’s 1963 visit to the Garden of the Gods in Illinois’ Shawnee National Forest to his lifelong quest for spiritual enlightenment, or his love of roots music to the country musicians who took him under their wings in Little Egypt. Nevertheless, rock ’n’ roll pilgrims from all over the globe show up frequently in Franklin County and southern Illinois, following the footsteps of a quiet legend, looking for a Beatle named George.(illinoistimes)

George Harrison and his sister, Louis

George Harrison’s sister, Louise (“Lou”), lived in the Benton “Beatle House” for only a couple of years. In 1963 she was married to a Scottish mining engineer, Robert Caldwell, who was something of a mechanical genius.

“Louise was a very savvy promoter for her brother and for the Beatles,” says Marcia Schafer Raubach, who as a high school senior edited her school newspaper and worked at her father’s radio station, WRFX-AM, in West Frankfort. In September 1963 she earned her 15 minutes of fame by interviewing George Harrison on the radio and, she claims, playing the first Beatles records on the air in America. “Louise came to the station (WRFX-AM) several times over the summer asking us to play the Beatles’ music, which up to that time had only been available in England,” to read the full story click here

I’d been to America before, being the experienced Beatle that I was. I went to New York and St Louis in 1963, to look around, and to the countryside in Illinois, where my sister was living at the time. I went to record stores. I bought Booker T and the MGs’ first album, Green Onions, and I bought some Bobby Bland, all kind of things.

When the Harrisons arrived in Benton in September, George and Louise hitchhiked to WFRX with a copy of She Loves You, which had been released the previous month in the United Kingdom. The single was also played by the station.

Ringo Starr originally planned to join Harrison on the US trip, but eventually decided to go to Greece instead.

While in Benton, George Harrison performed with a local group, The Four Vests, at the VFW (Veterans of Foreign Wars) Hall in Eldorado, IL. The guest spot was arranged by Louise. The Four Vests played their normal set during the first half of the show, then returned to the stage and introduced Harrison as “the Elvis of England”.

Harrison wore a dark suit and white shirt with no tie. They performed songs including Roll Over Beethoven, Johnny B Goode, Matchbox and Your Cheatin’ Heart.