Trending
You are at:Home»Music»Video Story»James Taylor: ‘I was a bad influence on the Beatles’

James Taylor interviewed in London. “Here is where it started,” he says. He made his first trip here in 1968, playing for Paul McCartney and George Harrison and becoming the first artist signed to the Beatles’ record label, Apple Records.

This was before he moved to Laurel Canyon with the rest of the denim-draped California dreamers who defined the sound of the late 60s and far beyond. Before he met David Crosby, Stephen Stills, Graham Nash, Neil Young, Jackson Browne, Linda Ronstadt, Carole King and Joni Mitchell. Before he and Mitchell fell in love. Before he wrote his pivotal album Sweet Baby James during a stint in a psychiatric hospital. Before his marriage to Carly Simon (Excerpt from the Guardian, to read the full article click here)

Taylor boarded a flight to London shortly after New Year’s Day 1968. His friend had given him the number of Peter Asher, the brother of McCartney’s then girlfriend Jane Asher; he had just been hired as a talent scout for the Beatles’ new label.

Asher liked Taylor’s demo and arranged an audition with McCartney and Harrison. “I was very nervous. But I was also, you know, on fire,” he laughs. “In my sort of mellow, sensitive way.” 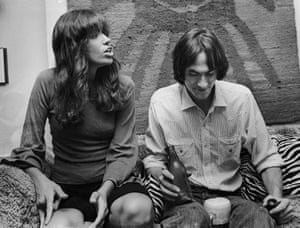 He played his song Something In the Way She Moves (a line Harrison pinched for the opening line of his song Something) and they signed him then and there to make his eponymous first album. At the time, the Beatles were making the White Album. “We intersected in the studio a lot,” says Taylor.

“They were leaving as I was coming in. I often came in early and would sit in the control room and listen to them recording – and hear playbacks of what they had just cut.” Did you hang out together? “Yeah,” he says. I ask if the band was unravelling by that point. “Well, it was a slow unraveling, but it was also an extremely creative unravelling.”

Heroin and other opiates were very available and very cheap in London at the time. “I picked up pretty soon after I got here,” he says.

“But you used to be able to buy something called Collis Browne’s Chlorodyne, which was an old-fashioned medication. Essentially, it was a tincture of opium, so you’d drink a couple of bottles and you could take the edge off.” Was it hard to kick the habit, given the circles he was moving in? “Well, I was a bad influence to be around the Beatles at that time, too.” Why? “Because I gave John opiates.” Did you introduce him to them? “I don’t know,” he says. Lennon, by many accounts, picked up a heroin habit in 1968 that contributed to an unhealable rift in the band.

A year later, after being released from his Apple contract, Taylor went to a rehab facility and moved to Laurel Canyon in Los Angeles, a deep-green crease that runs through the Hollywood Hills