Trending
You are at:Home»News»Sony Music has now signed on rock legend Jimi Hendrix

Following its deal earlier this month to serve as the exclusive North American provider of Beatles memorabilia, Sony Music Entertainment has now signed on another rock legend: Jimi Hendrix.

The new deal, signed with Authentic Hendrix and Experience Hendrix, the Hendrix family-run companies that oversee Hendrix’s legacy, includes the rights to design, develop and distribute exclusive Hendrix merchandise worldwide, including collectibles, clothing and accessories. The product line will be available in pop-up shops and at brick-and-mortar retail stores, as well as online.

“We placed Jimi in good hands with Sony Music, so we are more than comfortable with expanding our relationship to merchandise,” says Janie Hendrix, chief executive officer and president, Experience Hendrix and Authentic Hendrix. “Jimi’s persona encompassed more than music. He had a sense of style that we want to continue to present to the world… boldly and vividly. We’re confident The Thread Shop will carry out the next level concepts we envision. Jimi was and is larger than life, in our eyes. With the list of artistic greats the Thread Shop represents, Jimi will be at home among giants.”

The estate of Jimi Hendrix has announced a new collaboration with StraxArt that will bring a range of limited-edition artworks to market.

Each StraxArt item comes with a certificate of authenticity, a reproduction Hendrix signature and an Authentic Hendrix seal – you an watch to the collection HERE The Jimi Hendrix Collection will offer an assortment of high-quality reproductions of paintings and lyrics created by the late guitar icon, along with photographs and album covers. In a statement, StraxArt noted that the releases are designed to “spotlight Hendrix as the multi-dimensional artist he truly was.”

“Jimi’s versatility and array of artistic talent was part of what made him so amazing,” Janie Hendrix, CEO of the family companies, added. “His gift was so enormous that it expanded into a surprising range of art forms. Together with StraxArt, we have produced a beautiful collection that represents the many dimensions of Jimi’s artistry. We’re excited to offer these exclusive pieces, designed with those who love Jimi in mind.” Recently Mickey Martin, now 73, says he was stunned to be handed the red suede strides by the legendary guitarist during a gig in Cheltenham, in February 1967 when he was just 21.(dailymail.co.uk)

Mr Martin had been playing snooker when the owner of Cheltenham’s Blue Moon club ran in and asked for someone to work that evening as he was short-staffed.

Mickey then spent the next few hours running soft drinks from the bar to Hendrix and his band and says he found himself in the dressing room after the show.

‘Jimi came over to me, gave me a pair of trousers and said, ‘here you are man – thanks a lot for taking care,’ Mr Martin said.

‘We didn’t talk much – he just smiled. The gig was fantastic though – I was blown away by him. He was awesome.’ 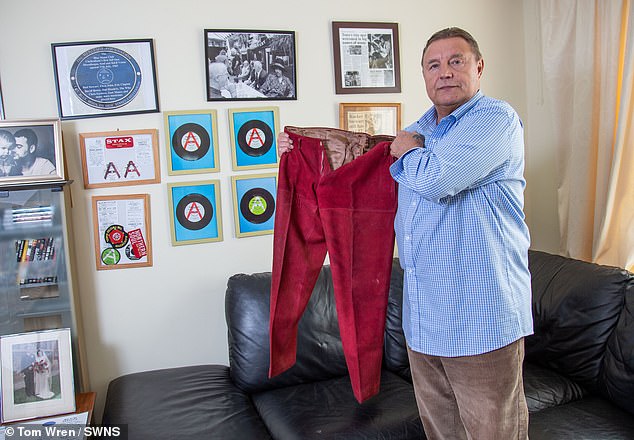 Recently, one of Gibson’s Weirdest & Most Embarrassing Moments

Many, if not most, famous players out there are associated with a particular guitar model. Excerpt from Ultimate guitar come – To read the full article click here.

The same could be said about one of the most influential guitar players of all time, Jimi Hendrix, who occasionally “cheated” on his Fender Stratocasters, famously flipped upside down and played left-handed. In various photos and videos, you can see the man holding a Gibson SG, Flying V, Les Paul, and even some lesser known 6-strings like the Acoustic/Bartell Black Widow. But when someone mentions Jimi Hendrix, it is pretty common for one person to picture him holding a Fender Strat.