Two die-hard Beatles fans have returned a diary belonging to Paul McCartney which they confessed to taking from his house in London in 1980.

The hard-backed red volume is packed with notes, doodles and sketches from 1970 – the eventful year in which the Beatles broke up.(News BBC) 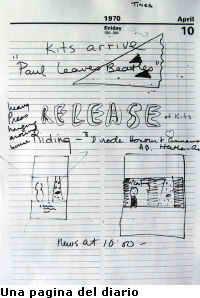 The two women in their mid-thirties, sisters Francesca and Paola de Fazi, talked their way round the star’s bodyguards at his Rome hotel following a massive free concert at Rome’s Colosseum at the weekend back in 2003. The concert drew an audience of some 500,000 people.

“Naughty girls,” McCartney reportedly told them, and signed autographs. He later confirmed that the diary was authentic.

“Perhaps they returned it because they really enjoyed the Rome concert,” he said. 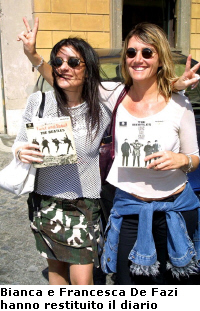 ‘The gate was open’ Paola de Fazi and her sister considered selling the diary
The women told reporters that during a trip to London, aged 10 and 11, they had sought out McCartney’s house in St. John’s Wood, London to take a few snapshots.

“The house was being refurbished and the gate was open. We screwed up our courage and went in,” they told the Italian news paper La Repubblica. 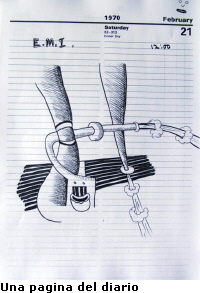 “There were all sorts of things: film reels, videos. We took the diary, a pair of boots and some music paper and made off while our friends were keeping watch outside,” Paola de Fazi said.

Later they considered selling the diary but they were told that they needed a statement by McCartney himself to prove its authenticity, and decided to keep it.

In one entry, dated March 26, Sir Paul writes about a telephone conversation with George Harrison in which he notes Harrison saying to him: ”It’s you who misunderstands, not me. Hare Krishna.”

Another entry on April 8 says ”Paul tells John: I’m not a Beatle either”, and then John’s deadpan reply ”good, that’s two of us”.

Notes in the diary include meetings with the press, birthdays and appointments with record companies.

An entry on 8 April, reads: “Paul tells John: ‘I’m not a Beatle either’.” Another in June reads: “Paul leaves Beatles”.

“We thought it would be good to give him his diary back,” the sisters said.

“Without his acknowledgement, there was little we could do with it.”