Tom Keylock makes the claim in a previously-unseen interview which will be shown in a new Netflix documentary about the conspiracy theories surrounding Jones’ death.

Keylock was interviewed by investigative journalist Terry Rawlings, whose book Who Killed Christopher Robin? is the basis for the Netflix documentary. Its title is a reference to Cotchford Farm having been the inspiration for AA Milne when he created Winnie The Pooh.

Rawlings interviewed Keylock in 2009, but his interview has remained unseen until now.

In the interview, Keylock is shown telling Rawlings: “What people don’t know is that very strong hash cakes were made. That’s why they were all stoned and they didn’t know what day it was.”

Official police reports say there were just three other people present on the night of Jones’ death: the guitarist’s girlfriend Anna Wohlin, Keylock’s girlfriend Janet Lawson and builder Frank Thorogood, who has been accused in several previous reports as responsible for Jones’ death.

Keylock admitted he was present on the night too, along with two other previously-undisclosed other guests. He told Rawlings: “Janet told me she didn’t remember anything, as she was out of her head. They all were. I was the only one who wasn’t stoned.”

According to Keylock, he was told by his brother Frank Keylock – a senior Scotland Yard CID officer – that Jones’ death was ordered to have been a cover-up because of mistakes by local police.

After Fifty years millions of Rolling Stones fans still remain undecided over what their favorite album is. Whether Buttons, Beggar’s Banquet, Let It Bleed or Exile On Main Street, their music remains eternal. And the ghost of Brian Jones still hovers over the band’s greatest moments. Anita Pallenberg claimed, Brian “was writing songs constantly.” But Jones tragically lacked “the confidence” to show any of his compositions to Jagger and Richards, so “he just erased them.” But Brian’s stamp was all over the band’s latest release. Bored with playing rhythm guitar on Jagger/Richards compositions, Jones had reinvented himself as a nimble multi-instrumentalist, intuitively adding a pallet of exotic sounds to the mix, from the sitar that helped catapult “Paint It, Black” (the lead-off single from Aftermath in the U.S.) to No. 1, to playing a delicate Appalachian dulcimer on “Lady Jane” (undoubtedly inspired by folk singer/author Richard Farina).

I enjoyed his company, and I tried incredibly hard, in 1966, to pull him back into the group. He was flying off. But my attempts to bring Brian back into focus were a total failure. After that … [long pause] He did some despicable things.

The man was failing. He had been a strong man, but he was wiping himself out. Brian demanded, you have to understand. And in a band like this, you also have to be supportive and giving. Having to deal with his jealousy, with Mick and me writing the songs, when you’re working 300-odd days a year — it becomes intolerable, and you can get really nasty about it. I tried to be fair to him. But to be honest, he was a bit of a bastard. And it doesn’t surprise me that he came to a sticky end. (Keith Richards)

Keith Richards revealed to Uncut magazine, that while recording the band’s new blues collection, Blue & Lonesome, which drops on Friday (December 2nd), his past came back to face him: “The last time I ever played ‘Little Rain’ was with Brian Jones. Now, I’m playing ‘Little Rain’ in the studio and suddenly Brian is looming in front of me. . .” Mick Jagger went on to say: “Exactly! You can feel them around you. Keith probably thought, ‘I’d better get this right.’ I just wanted to get the harmonica solo right, I must have learned that from Brian.”

Whenever the Stones would go on tour, me and Brian would always share a room. He could be really sweet and lovely and was more intelligent than any of the others. He was very articulate. But he could also be a little bastard sometimes. He had an evil streak which a lot of people only remember him for. Brian would do nasty things, like steal my girl or something one night. So he’d do the dirty, then you’d end up forgiving him because he’d have that little innocent, angelic smile: “Sorry, man. I didn’t mean it.” So you’d love him and hate him.

I’ve always said good things about him because he was the creator of The Rolling Stones. I don’t care what you say about Mick and Keith, if it hadn’t have been for Brian they probably would have had a different band in Dartford, out in the sticks where they lived. They weren’t Londoners, though Mick always tries on his cockney accent, which he doesn’t deserve, really. The only working-class ones in the Stones were me and Charlie. (observer.com) 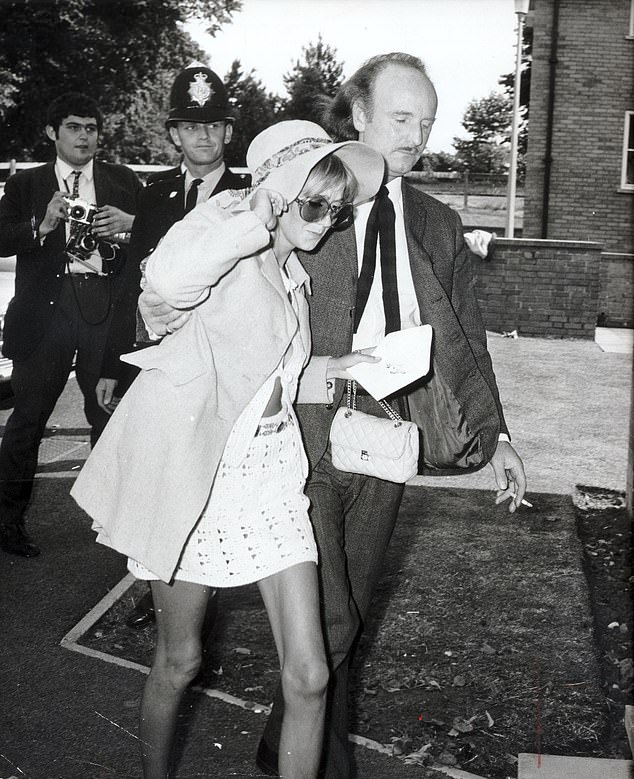 Jones’ girlfriend Anna Wohlin (pictured with Frank Thorogood), who moved back to Sweden directly after the death, later said: ‘I don’t know if Frank meant to kill Brian. Maybe it was horseplay in the pool that went wrong. But I knew all along he did not die a natural death. I’m still sure of it’