Trending
You are at:Home»Fashion»Ronnie Wood reunion with ex Jo and daughter Leah with third wife Sally

The Rolling Stones guitarist made a special appearance at a private viewing of The Devil’s Fuge, West Contemporary gallery’s art pop-up which has been installed in the lower ground floor of Covent Garden store ALBIVA.

The musician looked relaxed in a black winter coat and woolen jacket worn over a colourful printed shirt while observing the variety of limited edition prints and original artworks on show at at the central London venue. 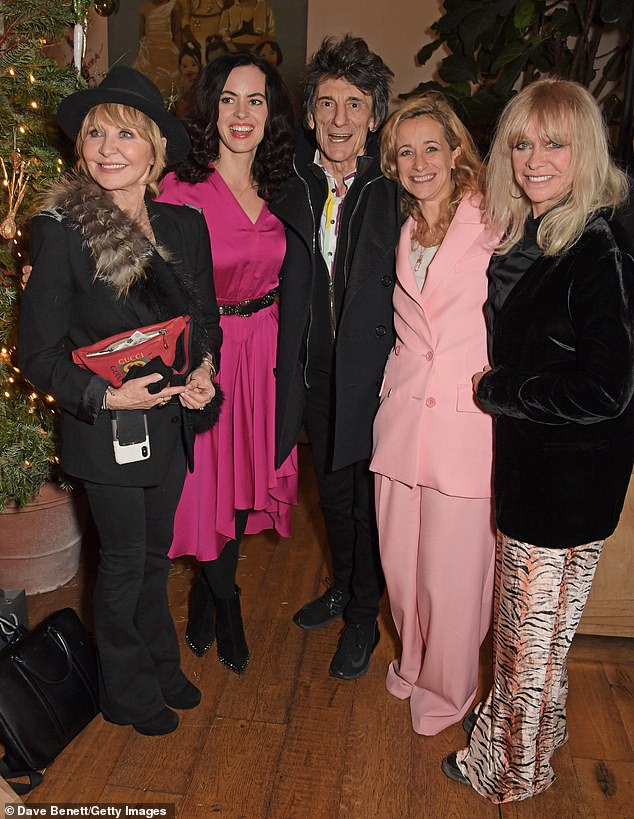 The couple had familiar company in Ronnie’s ex-wife Jo – with whom he maintains a strong friendship – and their daughter Leah, who at 41 is the same age as Sally.

Lately the Rolling Stones guitarist opened up about regularly painting Sally, 41, in the nude. Ronnie Wood has turned his wife’s shapely bottom into a rug.

“I’ve turned three paintings into rugs and they are backstage on the tours. “They are called Wild Horses, The Bum and I Feel Like Playing. “I have painted Sally a lot and The Bum is hers. “It’s fantastic. It is painted from a sketch then I developed it on my iPad using a brushes app.”

He revealed The Bum rug as he launched his new Bremont watch collection which includes hand painted faces he created on tour.

Ronnie, who married Sally in 2012 and is dad to three-year-old twins Gracie and Alice, added: “Painting Sally is a dream.

“Sometimes I even draw and sketch something on the quiet and she doesn’t even know I’m doing it.”

The Bum and I Feel Like Playing are ­dedicated to theatre producer Sally, while Wild Horses is a tribute to the Stones’ track of the same name from their 1971 Sticky Fingers album.

He revealed The Bum rug as he launched his new Bremont watch collection which includes hand painted faces he created on tour.

Although recognized primarily for his status as a rock ‘n’ roll deity, the 71-year-old Rolling Stone has been turning heads with his visual art for even longer than he has with his music.
Wood’s paintings have been exhibited around the world, and today grace the walls of London’s Theatre Royal, Drury Lane, and have been collected by the likes of Bill and Hilary Clinton.

Ronnie Wood has recently released his brand new book titled ‘Ronnie Wood: Artist’, the first comprehensive collection of his paintings and other artworks, created to mark the occasion of his seventieth birthday.

The book brimming with six decades of memorable and diverse work, from his art college portfolio (he studied alongside Pete Townshend) to the intimate work of his personal life today and Ronnie gives his own insight on the motivation behind each piece.

‘There is no kind of therapy like the one you have from starting a picture and then seeing it through to the end’. Ronnie Wood