Trending
You are at:Home»Fashion»Ronnie Wood used to take a Bunsen burner to parties smoke cocaine

Ronnie Wood, 72, looked in high spirits as he was joined by his wife Sally Humphreys, 41, at the world premiere for his documentary Somebody Up There Likes Me on Saturday night.

Ronnie Wood has revealed that he used to take a Bunsen burner to parties so that he can smoke cocaine. ‘I felt that with the base, the ­freebase, it was controlling me. I had no control over it. It took me about three years to get off it. ‘I enjoyed the s**t out if it. Took it with me wherever I went. I thought it was the best thing going.

‘I would take it to parties and go, ‘Everybody try this’, get [a]great big Bunsen burner out, the pipes, the works, freebase and ­everything. And people would be going, ‘You’re f*****g crazy’ but I would love it.’

‘I have seen enough people go over the top.

‘Some of them didn’t make it. It was a really horrible thing and you would learn a lesson from that.’Somebody Up There Likes Me, which follows the life story of Ronnie’s rise to the top, features an array of archive footage and candid interviews that takes viewers on his biographical journey from his childhood to his international success with The Rolling Stones.

Arriving in style to the event during the 63rd BFI London Film Festival at the BFI Southbank, the star put on a dapper display as he cosied up to his stylish other half. 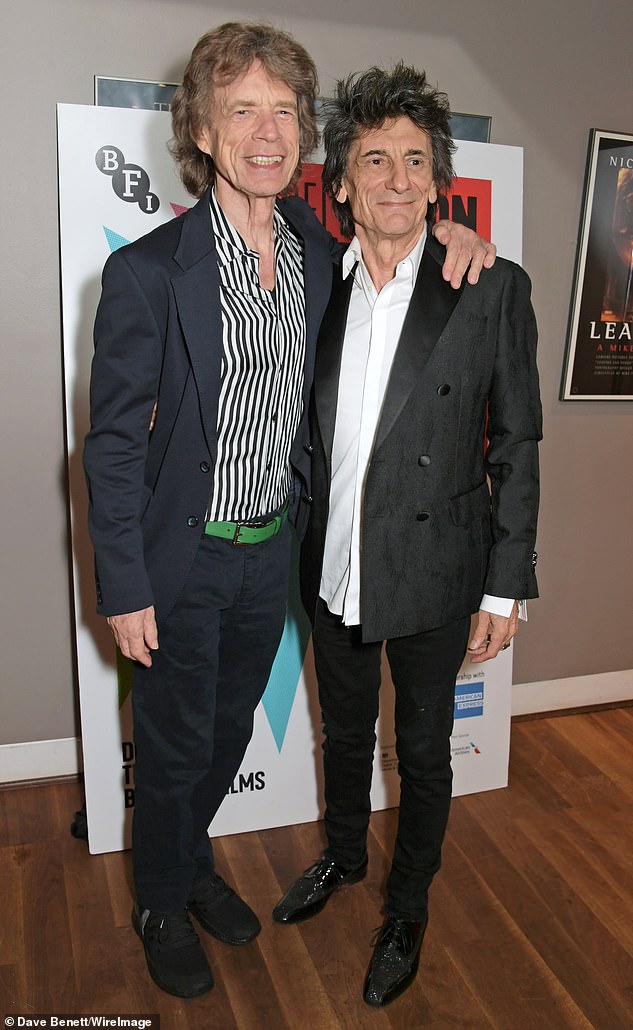 Pals: Meanwhile, Ronnie’s The Rolling Stones bandmate Mick Jagger, 76, also turned up to the event to show his support

Ronnie – who raises two-year-old twins Alice and Gracie with theatre producer Sally – was looking dapper in a blue suit as he left the venue.

Rolling Stones star Ronnie Wood has joked that the biggest shock of his new documentary, Somebody Up There Likes Me, is that he’s still alive today to make it. Ahead of the London premiere on Saturday evening, the 72-year-old opened up on what fans can expect from the feature – despite not yet seeing the complete project himself – and he promised it will be a ‘buzz’ before excitedly heading on into the screening with his proud wife, Sally, in tow. Ronnie told Metro.co.uk: ‘There’s a lot of revelations, in that I’m still here today!’ Beaming from ear to ear, the rocker laughed: ‘Fans will be like, “Wow! How’d he get through that one?”‘ Talking about the parts of the film he’d seen, it sounds as though things will get emotional as the Honky Tonk Women hitmaker revealed how survival was a key factor throughout. ‘The great thing [in the documentary]is the essence of survival,’ the star affirmed: ‘And like I said, the support was reflected throughout the cuts that I’ve seen of the movie the short clips I’ve seen.’(dailymail)