A series of David Bowie coins have been released as part of the Royal Mint’s music collection – including one that was launched into space.

The one ounce coin orbited the Earth’s atmosphere for 45 minutes after launch before its eventual return, and it is now being offered as a prize on the Royal Mint’s Facebook page. (NME) 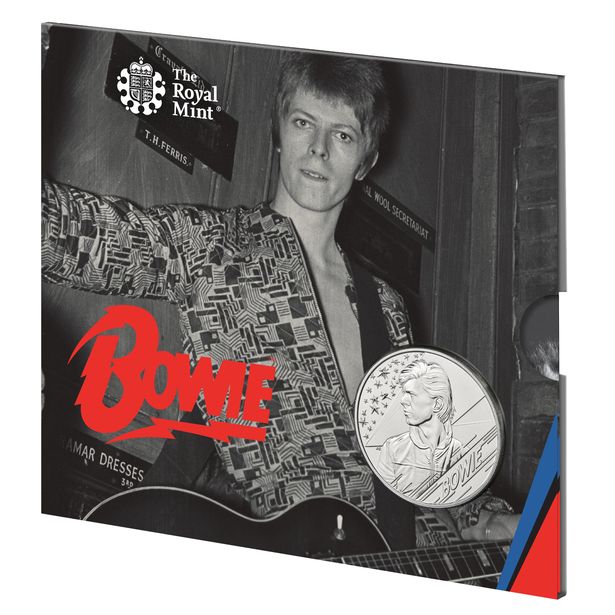 The coin celebrates the music icon’s career with a design inspired by his formative years spent living and recording in Berlin, as well as featuring the iconic lightning bolt design from ‘Aladdin Sane’. 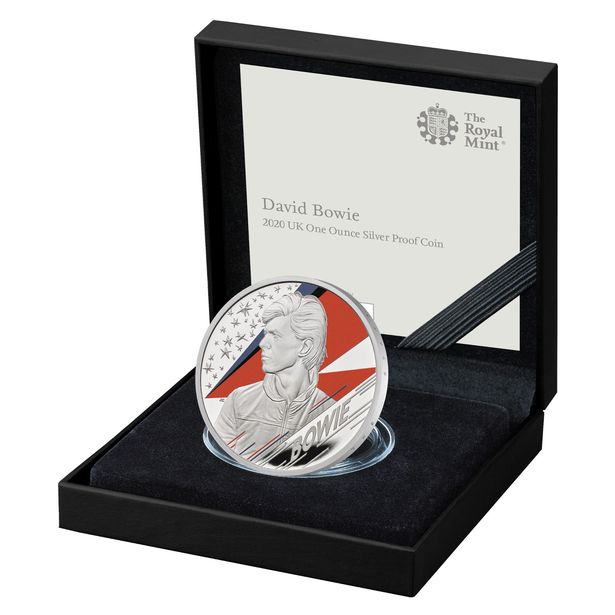 Fans can purchase the coins from the Royal Mint’s website, which range from £13 for a uncirculated £5 coin, all the way to an “out of this world” which costs a staggering £72,195 for a kilo gold coin in a denomination of £1,000. 11 of the gold coins will be minted.

The Aladdin Sane lightning bolt design has also employed technology to create a glitter effect, giving the impression that it is sprinkled with Stardust.

Bowie, who is considered one of the UK’s greatest ever solo performers, is the third recipient in the music legends series and follows coins in honour of Queen and Sir Elton John.

Photographer Mick Rock’s images of David Bowie are some of the most famous in all of music history. Now, you can actually wear them on your feet.(footwearnews.com)

The legendary eye recently partnered with e-commerce platform TheCollaboratory to produce a series of slip-on sneakers that shows off some of Rock’s most famous snaps of Bowie, from his Ziggy Stardust era and beyond. Each of the four styles is named after one of the music artist’s songs, like the Moonage Daydream, which shows Bowie as his Ziggy alter-ego (complete with the iconic astral sphere symbol on his forehead). For the collaboration, Rock gave the well-known backstage photo from 1973 a psychadelic shock of color and collage effect.

Another style, the Rebel Rebel, shows Bowie in another iconic image taken by Rock, also in 1973, for the artist’s “Pin Ups” album, which he released after retiring his Ziggy persona. On this style, Rock hand cut a series of this print to create a rip-art collage effect.

“The shoes (are) something we have been discussing for years,” said TheCollaboratory’s chief collaboration officer Scott Fishkind, who is also the publisher, co-creative director and co-founder of the adjacent As If magazine. For its latest issue, the luxury biannual magazine tapped Rock to shoot actor Benicio del Toro. From there, actually producing the capsule collection began to materialize. “His work translates to fashion so well, and his subjects are iconic giants that we’ve all grown up with and have an emotional connection to,” added Fishkind. A portion of the proceeds from the limited-edition collection will go to various non-profits like the NAACP, Campaign Zero, the COVID-19 Solidarity Response Fund for the WHO and NYC’s COVID-19 Emergency Relief Fund.