Trending
You are at:Home»Travels»Surprising Acts Of Rock Star Debauchery

Rock makes the world goes round. When you’re one of the biggest, wildest bands in music,you need transport to match. Source Cracked.com

It doesn’t matter how many meat catapults or flaming codpieces you own; your fans will turn against you if they see you roll up to a gig driving a bombed-out Astro van.

Or at least that’s the thought process that led to the birth of the Starship: a drug-fueled flying sex den that flew the biggest names in rock music around the world.

Among the clients who paid a ball-smashing figure of $2,500 per hour for the plane were Led Zeppelin, Alice Cooper, The Rolling Stones, and, The Bee Gees .Led Zeppelin was the first to lease the plane, in 1973, after a white-knuckle flight from Oakland, Calif., to Los Angeles in a tiny Falcon 20 business jet terrorized the entourage. 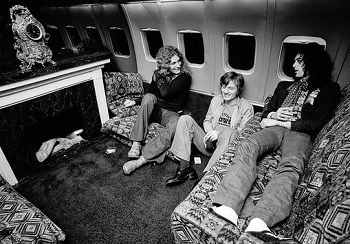 Having lived a previous (and tasteful) life as a commercial passenger plane, the Starship was outfitted like Ron Burgundy’s treehouse.

One of the great artifacts of the coke-flecked, halter-topped, ‘lude-dropping rock’n’roll gestalt of the ’70s — and probable inspiration for Austin Powers’ shag-a-delic private 747 — the Starship brimmed with gaudy-chic delights. There was a bedroom with a king-sized waterbed, a drawing room with a fake fireplace, a 30-foot brass-trimmed bar with built-in electric organ, a prehistoric video system stocked with everything from Deep Throat to Duck Soup and two stewardesses to cater to the velvet-­trousered minstrels fresh from their Madison Square Garden gigs. The interior was so relentlessly tacky that Mick Jagger literally gasped when he first saw it the first time he stepped aboard and glimpsed the wall-to-wall Vegas.

But Jagger was the exception. Mick Jagger generally gasps only when he sees himself in a mirror. 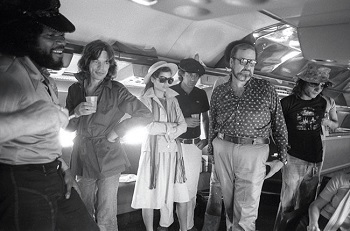 And, just in case you were wondering whether the infamously debauched guests of the Starship felt the need to rein in their behavior while soaring through the lawless sky, the answer is no, of course they didn’t.

Only a few details have emerged regarding the depravity that went on aboard, presumably because history isn’t yet prepared to hear the full details.

For starters, the Allman Brothers climbed aboard to find “Welcome Allman Brothers” written on Starship’s bar in cocaine. One unnamed record executive wandered around the plane, waving a handgun for no apparent reason.

The Starship’s punishing economics and four thirsty engines put an end to its reign after only four years. Frampton was the last to charter it. “It was headed for the scrap heap,” he says. “We were the last to use it before it was decommissioned.” The plane bounced among owners before it was broken up for parts in 1982

This story originally appeared in Billboard.