Trending
You are at:Home»Highlight»The Stones in the Park July 5 1969 -Farewell Brian Jones

“I remember lots of things about Hyde Park,” drummer Charlie Watts told The Sun. “Going to pick my trousers up before I went to the Dorchester. Being at the Dorchester with Allen Klein [the Stones’ manager in 1969]marching about like a little Napoleon.”

He added: “The butterflies were a bit sad, really. They looked good from the audience, but actually if you were near them there were an awful lot of casualties…It was like the Somme before they even got off the ground.”

Speaking about Jones’ death, he recalled: “Brian’s death wasn’t unexpected. You didn’t expect him to die, but he wasn’t well for a long time, a couple of years. So it wasn’t as big a shock as if it had been Bill (Wyman), for example, you would have thought ‘blimey’…But he was only young, you didn’t go at that age.”

It was the Stones’ first public concert in over two years, and was planned as an introduction of new guitarist, Mick Taylor, though circumstances inevitably changed following the death of former member Brian Jones two days earlier. The band rehearsed at the Beatles’ studio in the basement of 3 Savile Row, and Jagger and Richards came up with a 14-song set; the Hyde Park concert would be the first time many of the songs had been played before a public audience. The PA system was supplied by Watkins Electric Music, who had already handled amplification at previous Hyde Park shows. 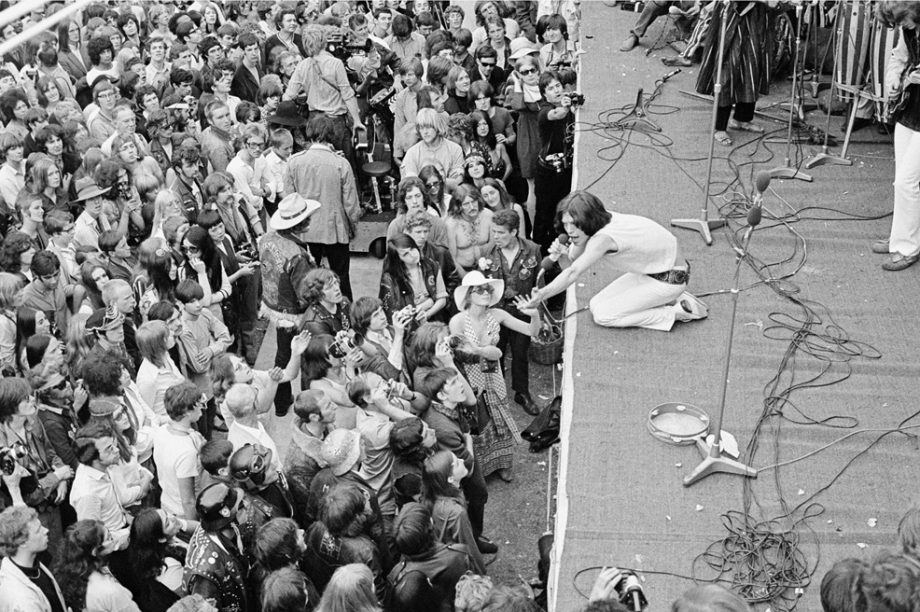 Fans started to arrive at the park with candles on 4 July in tribute to Jones, and by the morning of 5 July, 7,000 people had already gathered. Mick Jagger read a short eulogy on stage before the Stones’ set began, reading two stanzas of Percy Bysshe Shelley’s poem on John Keats’s death, Adonaïs, from a calf-bound book. After this recital, several hundred cabbage white butterflies were released. The setlist for their performance was “I’m Yours & I’m Hers,” “Jumpin’ Jack Flash,” “Mercy Mercy”, “Down Home Girl”, “Stray Cat Blues”, “No Expectations”, “I’m Free”, “Loving Cup”, “Love in Vain”, “(I Can’t Get No) Satisfaction”, “Honky Tonk Women”, “Midnight Rambler”, “Street Fighting Man”, and “Sympathy for the Devil”. During the 18-minute-long rendition of “Sympathy for the Devil”, a number of African tribal drummers joined the band.