Long After the Beatles Yellow Submarine, the sign was also widely considered a symbol of “the beast,” the horned man, the devil, or whatever other moniker you wish to slap on the dark lord of the underworld that all rock & roll fans secretly worship (admit it).

For many years, Ronnie James Dio and Gene Simmons of KISS both claimed credit for having pioneered the hand gesture adored by metal fans around the world. Dio claimed he invented it before joining Black Sabbath in 1978. Simmons claimed he came up with the gesture as part of his persona as The Demon. (Of course, one or both rockers may have come up with the gesture independently, unaware that they had been beaten to it by a Beatle.)

Several years before those metal milestones, John Lennon is clearly seen making the gesture in both the photographic and art content of the sleeve for their single “Yellow Submarine”… in 1967.(ranker.com)

Close inspection reveals he is not just giving a version of the ASL sign for “I love you,” as some have tried to argue. Especially in the cartoonish art, Lennon is clearly throwing the devil horns.

Obviously this is because the Beatles were devotees of Aleister “Sgt. Pepper” Crowley, as noted.

“We were in America, all getting house-trained for adulthood with their indisputable principle of life: short hair equals men, long hair equals women. Well, we got rid of that small convention for them…perhaps they grew too tired for (morals).” -Paul McCartney, 1966.

Beatles the protopunk. The original photo session for the Yesterday and Today album. Does this look “sweet and innocent” to you? An abortion clinic? Ritual sacrifice? No, it’s the Beatles. 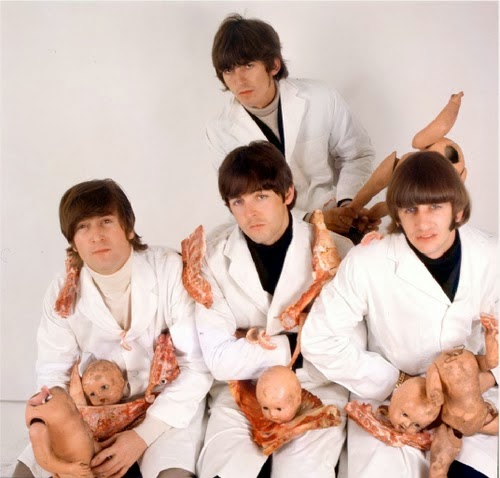 Body parts are essential in satanic rituals.
It was thought to be a protest against the record company “butchering” the Beatles’ songs. “Rubbish, absolute nonsense” -photographer Robert Whitaker.
Whitaker was planning a blasphemous triptych icon of Beatles butcher photos, using the “sausage”, “lp cover”, and “nails” photos, in that order. Sun halos were to be added around their heads to make them sun-worshipping “human gods“
Share. Twitter Facebook Google+ Pinterest LinkedIn Tumblr Email